Why should BloNo concern ourselves with the Palestinian struggle for justice?  I’ll tell you:  If you didn’t already know, Israel is an apartheid state.   Apartheid causes suffering, and we should all do whatever we can to decrease suffering.  “But why is it our concern,” you may ask?  You might say, “I don’t have anything to do with it.”  And you’d be wrong.

Israel has been one of the top recipients of US aid since the state’s inception.  So in a sense, we—all of us who have ever paid taxes—are contributing directly to financial and military support of Israel’s racist government.  And there is something even closer to us who reside in BloNo: Caterpillar bulldozers are routinely used to demolish Palestinian homes, uproot olive trees, pave the way for the apartheid wall, and even kill civilians.  As you know, Caterpiller is based out of Peoria; many of us have even had friends and family who have worked there (before they started laying tons of people off, of course), giving us an even more direct tie to the suffering of Palestinians.

I could go on and get really graphic about some of the atrocities taking place on a daily basis in Gaza and the West Bank, but don’t worry; I’m not going to belabor the issue much more here.  Suffice it to say, the situation is bad; the continuing conflict between Israel and Palestine is awful on both sides.  People are dying on both sides.  People are suffering on both sides.  But one side has way more power, does way more damage, has killed way more people, and causes way more suffering than the other.  If you are honest with yourself, you know which side that is.

We can and must do something to help stop the atrocities.  So stand up in solidarity with the people of Palestine, and support the UN vote to recognize Palestine that is supposed to take place later this month.  And if you really want to help, one way would be to look for how you can participate in the BDS movement (boycotts, divestment, and sanctions) to help bring down the apartheid state and usher in equality.  After all, mounting international pressure played a huge role in toppling apartheid in South Africa, and it could work in Israel and Palestine too.

As Nelson Mandela has said, “The UN took a strong stand against apartheid; and over the years, an international consensus was built, which helped to bring an end to this iniquitous system. But we know too well that our freedom is incomplete without the freedom of the Palestinians.”  The same is true of the freedoms we have here in BloNo; they are incomplete as long as others are suffering.

How might you begin to get involved locally?  Join the Common Action Free School this Saturday, September 10, for a panel discussion about Palestine and the Arab/Israeli conflict.  The discussion will begin at 4PM.  Our panelists will be: Mohamed Elkabbash, Rana Kunkar, Josh McGowen, and Issam Nassar, all of whom are intimately acquainted with the Palestinian struggle for justice.   This discussion will take place at the Market Street Food Market, 1002 W Market Street in Bloomington. 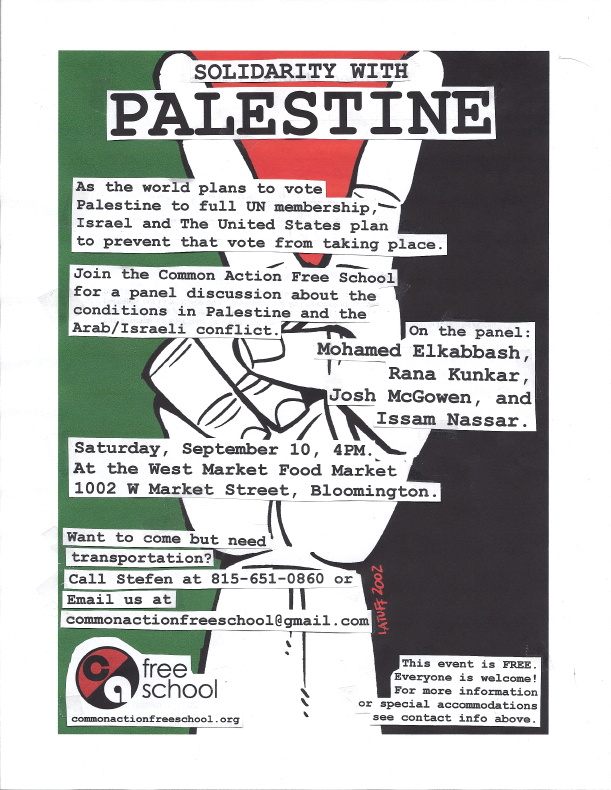 « Scenes of the Labor Day Parade
Fund Our Communities – Cut the Military! »

2 thoughts on “Solidarity with Palestine”