From the Wisconsin worker uprising to the Occupy movement, 2011 was a year of resistance. Bloomington-Normal was a part of it.

Solidarity with the Wisconsin Worker Uprising

2011 began with one of the largest labor protests to rock the country in decades. Wisconsin teachers and students spontaneously staged an occupation of the Madison capitol in protest of Governor Walker’s attack on worker’s rights. Workers from across the country voiced their support for the Wisconsin teachers.

Numerous delegations of BloNo residents traveled to Madison, Wisconsin during the occupation of the Madison capitol. Except for the last picture taken in late April, these are pictures from the first Saturday demonstration in February, February 19th, when approximately 80,000 people descended on the capitol square. 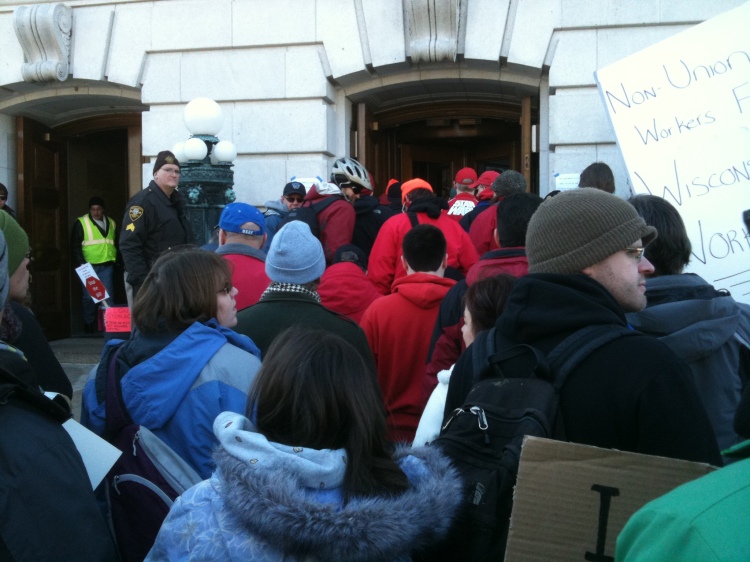 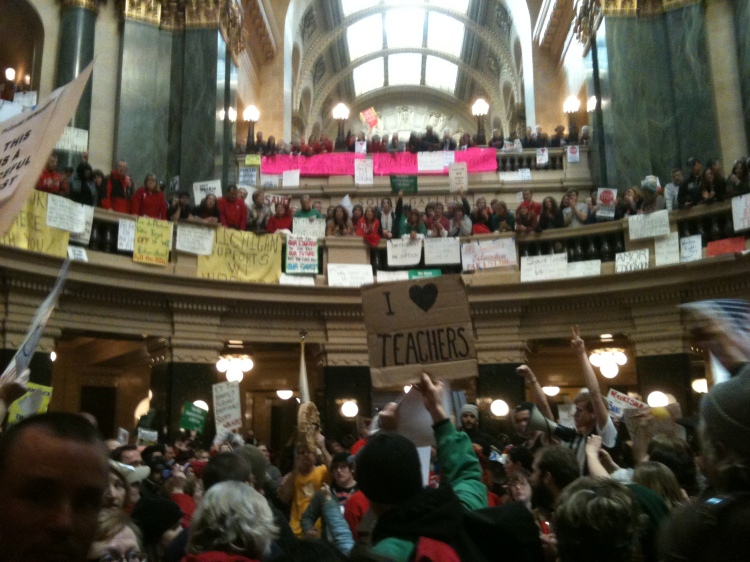 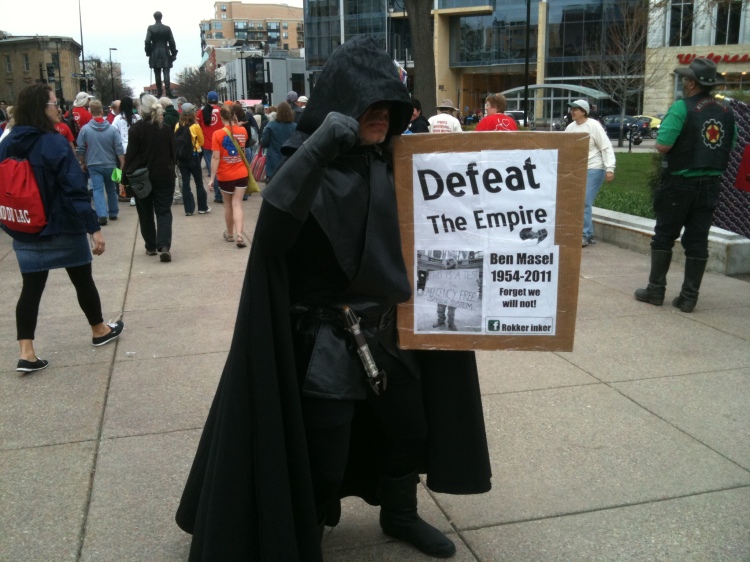 A new education group, the Common Action Free School (CAFS), organized educational sessions and skills classes, in collaboration with community groups, bringing people together around political concern. Below, in the second photo, Andy Thayer speaks on rebuilding the U.S. left on February 5, 2011. Other classes held by CAFS included the topics of the class struggle, education, the wars, solidarity with Palestine, a walking social history of Bloomington, and food and sustainability. 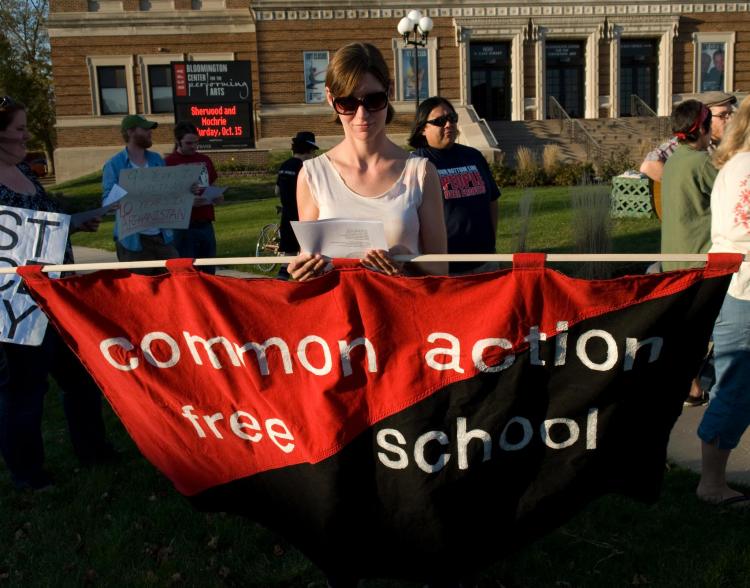 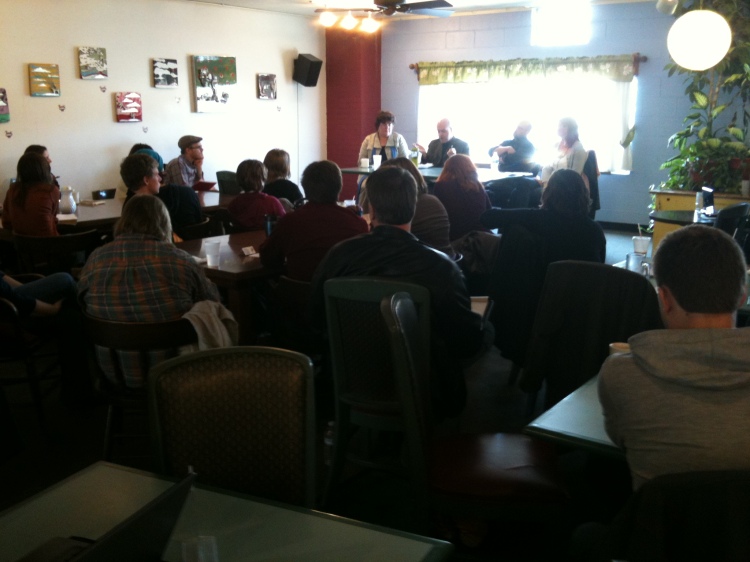 BloNo anti-war activists participated in two Chicago marches against the wars – in March and October. Protests against the wars continued in Bloomington-Normal, the largest garnering over 40 people marking ten years of war in Afghanistan. The Bloomington-Normal Coalition for Peace and Justice (BNCPJ) held a September forum on what spending priorities should be in the United States, if billions of taxpayer dollars were not spent on war. 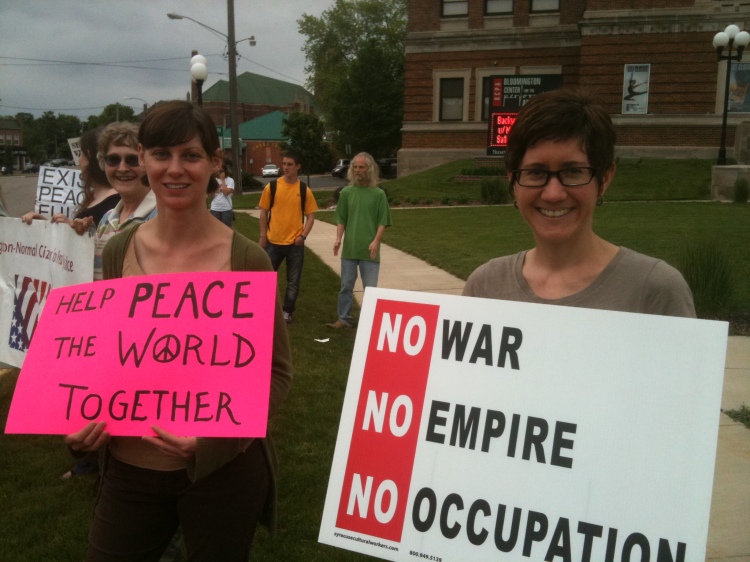 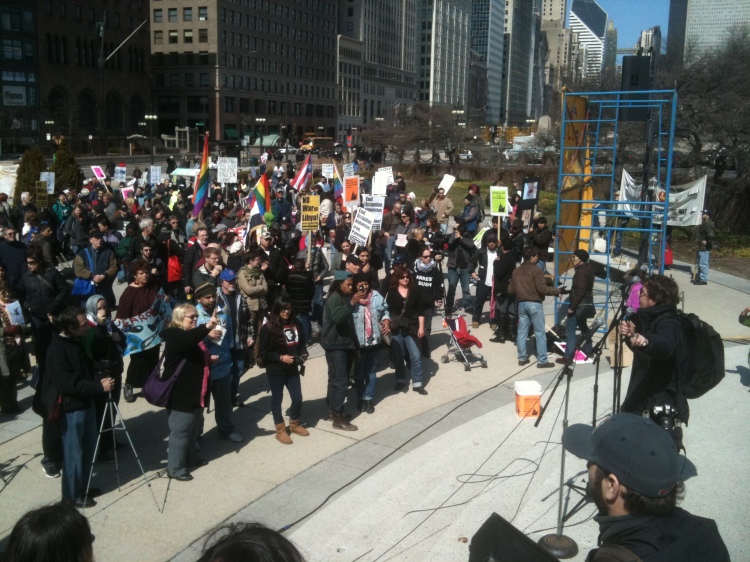 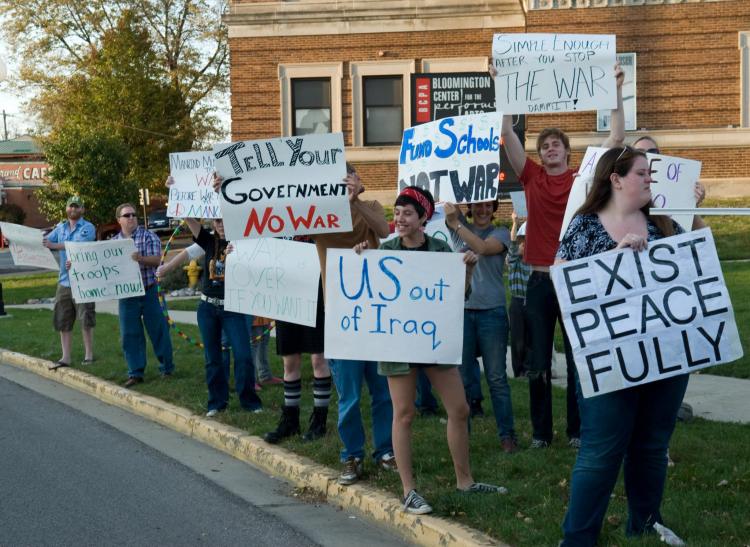 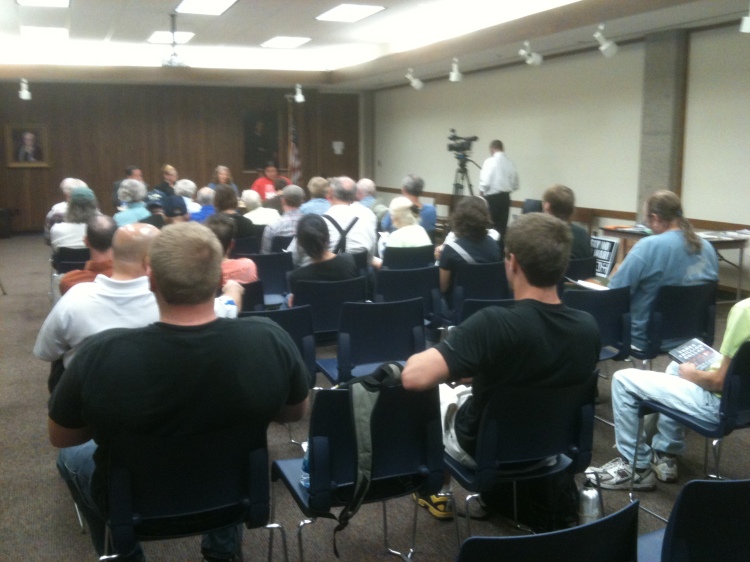 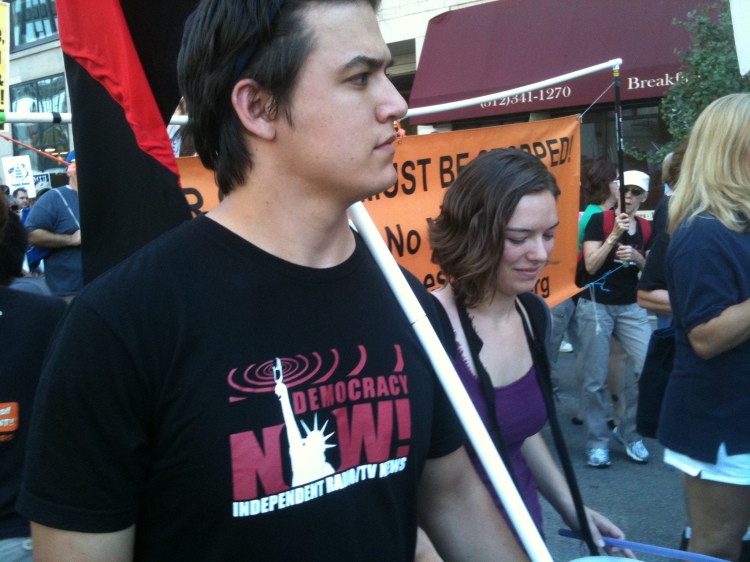 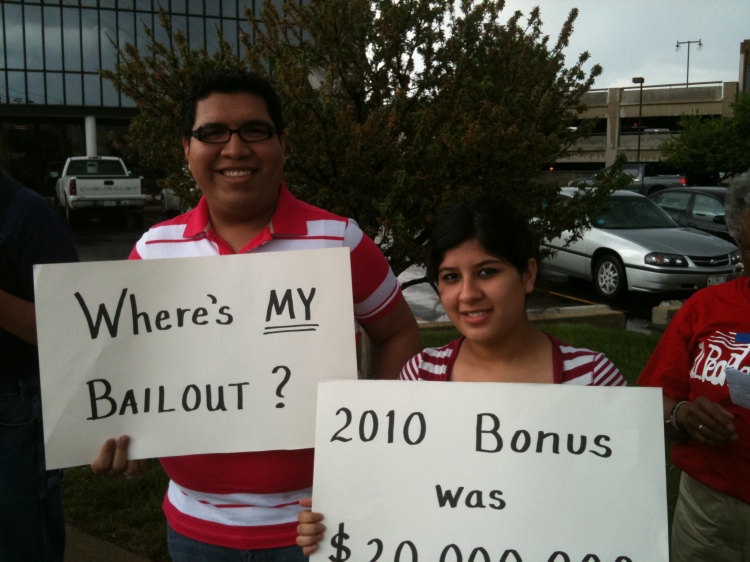 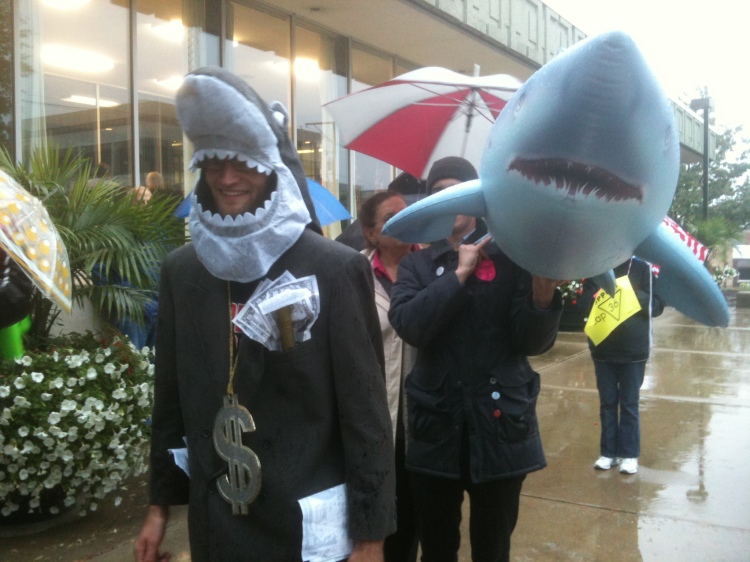 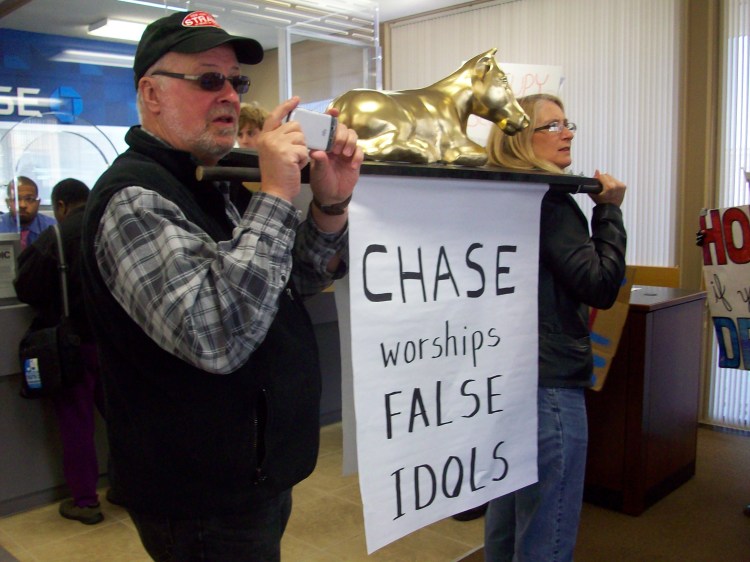 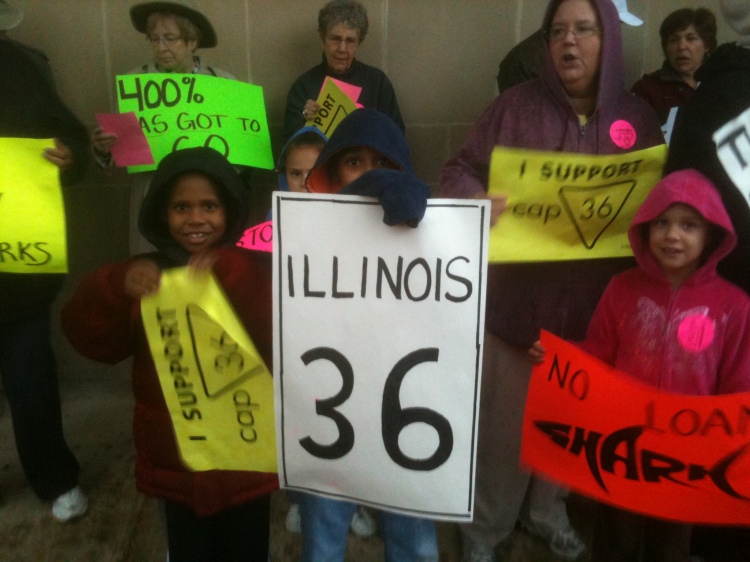 Latinos United For Change (L.U.C.) continued its work fighting for the rights of immigrants. Two immigrant rights issues stood out. In June, L.U.C. brought attention to proposed E-verify legislation that would result in substantially increased enforcement and more deportations. L.U.C. members and allies protested a hotel fundraiser for the Republican Party, which included E-verify supporters Mark Kirk and Adam Kinzinger. In December, L.U.C. and Illinois People’s Action held a community meeting on the increased enforcement by the McLean County sheriff department and an educational on how private prisons benefit from enforcement. 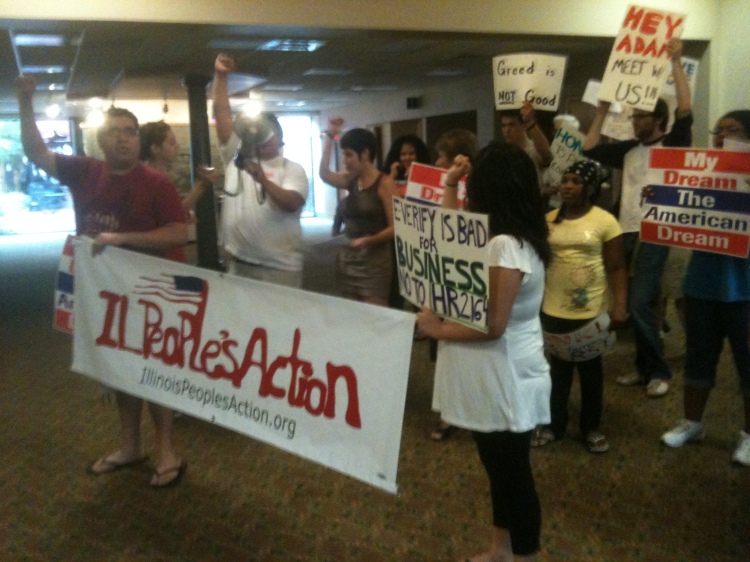 Come Together for Democracy

Come Together for Democracy was a series of networking sessions aimed at promoting activist collaboration in Bloomington-Normal.

Early in the year, individuals and groups traveled to Wisconsin to show support for the Wisconsin uprising. Laborers’ Local 362 participated with a delegation, and MoveOn organized both a Springfield and a Bloomington rally.

A number of labor actions occurred in Bloomington-Normal and surrounding communities.

In April and in July, pro-labor activists in BloNo demonstrated in solidarity with AFTRA broadcasting workers who were in a bitter contract dispute with their multinational boss.

Postal workers in Bloomington-Normal, coordinated with locals across the country, held a demonstration to defend six-day delivery and stop the gutting of services. Also, MoveOn and the Laborers Union collaborated to demand more jobs and adequate governmental spending on infrastructure projects. 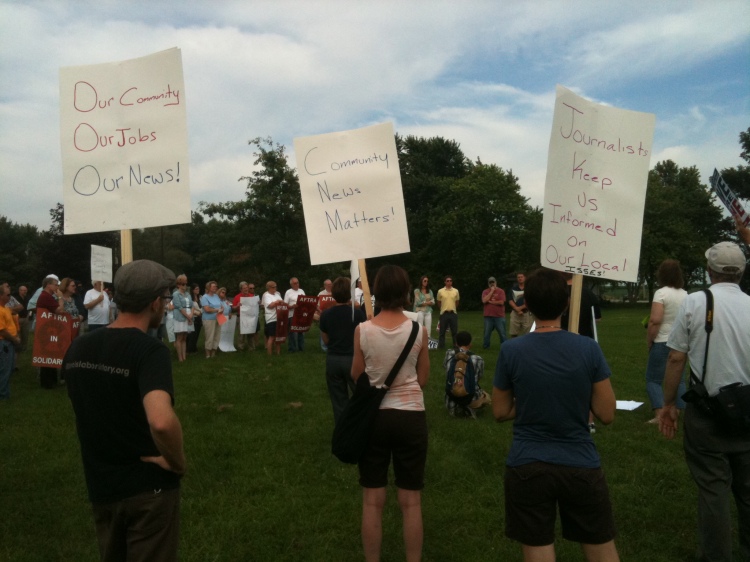 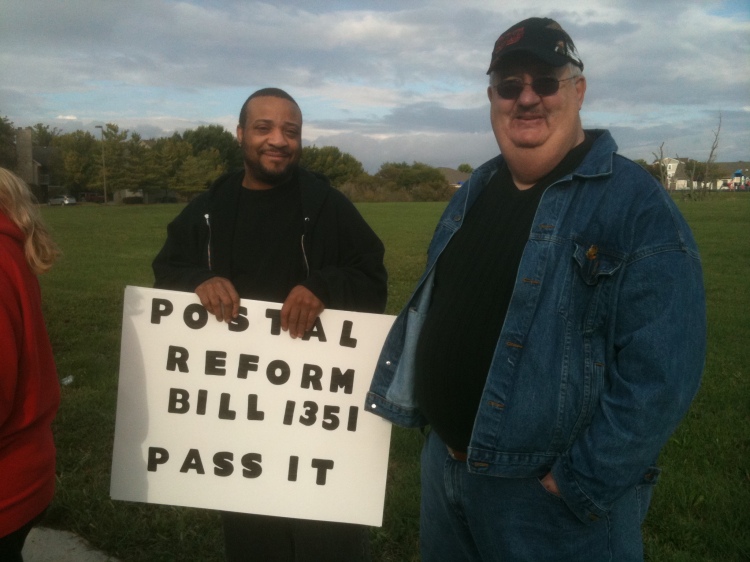 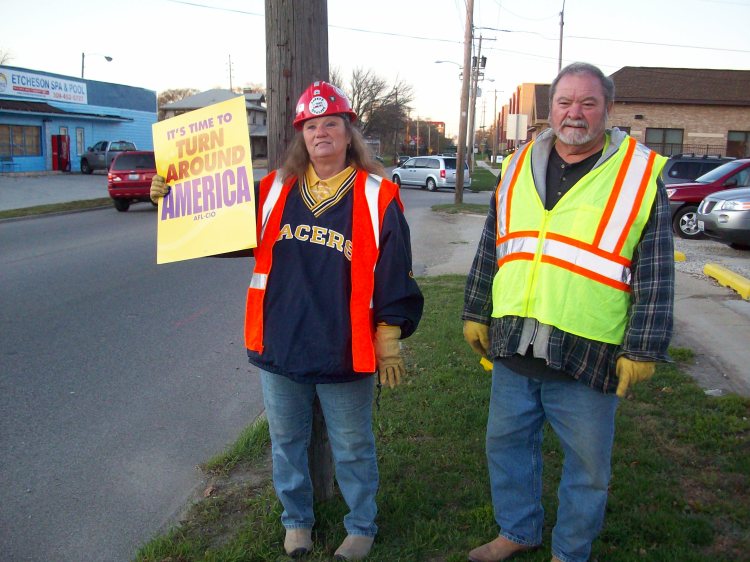 Bloomington-Normal has a vibrant green movement with long-standing organizations such as the Ecology Action Center and the Land Institute.

The Ecology Action Center held its annual Illinois Sustainable Living and Wellness Expo at Illinois Wesleyan with over 100 participating organizations, and provided classes and resources for the community. The Town of Normal continued forward with its sustainability plan, implementing optional form-based code and holding hearings on a proposed bike path on the Main Street corridor.

One setback for the green movement was the Normal Town Council’s failure to approve urban chickens.

A number of green organizations were started or received new momentum in 2011.

The Really, Really Free Market, in partnership with Feed the Need, promotes a sustainable future with its grassroots provision of services. The Really, Really Free Market provides products free-of-charge, through donation, which works to conserve valuable resources and conserve the environment. Feed the Need offers skills and aid to residents of West Bloomington, in partnership with many other organizations.

Vision 2020, a local transition town organization, received attention after it co-sponsored, with the Ecology Action Center, a showing of Gaslands at the Normal Theater. Vision 2020 hosted two well-attended community meetings. A talk by Ruah Swennerfelt drew over 90 people, and the panel presentation on local strategies generated interest in planning skills classes in town. 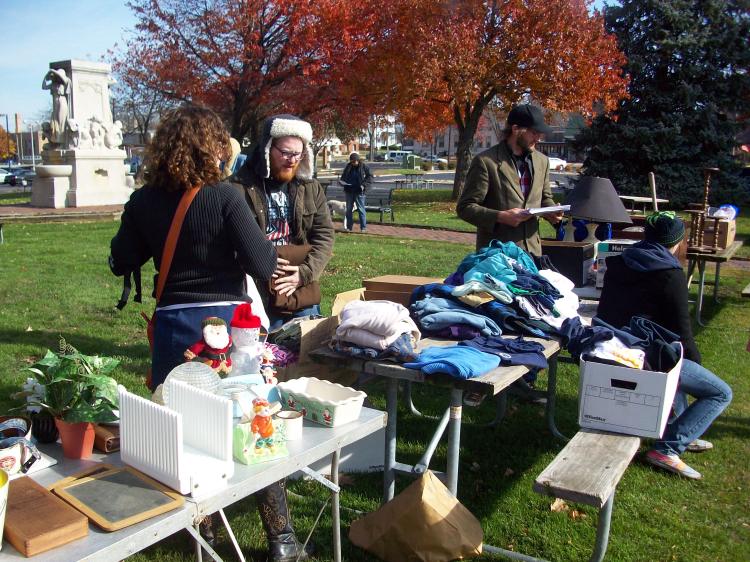 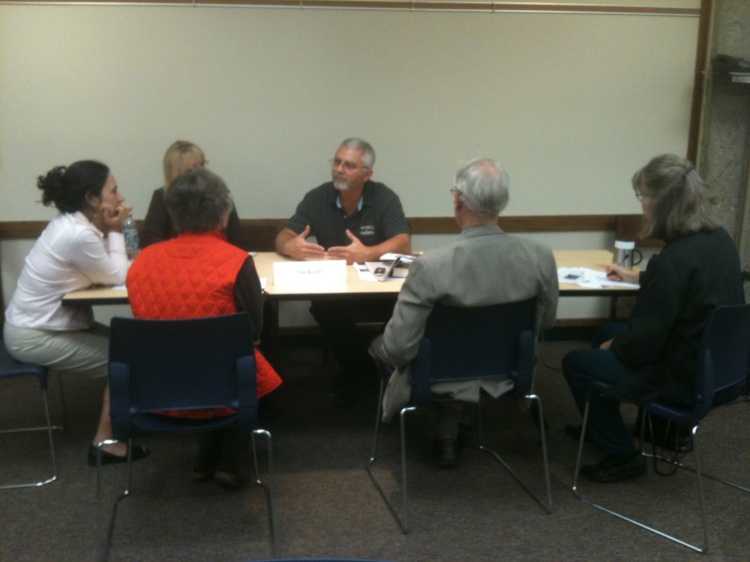 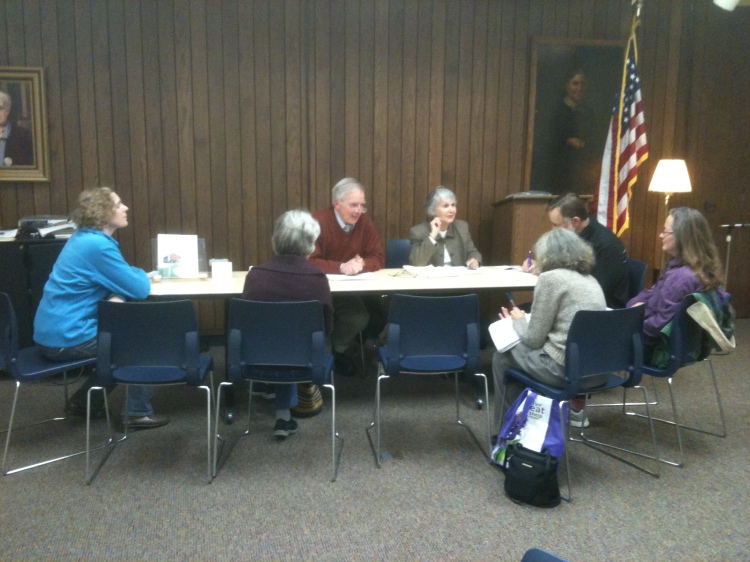 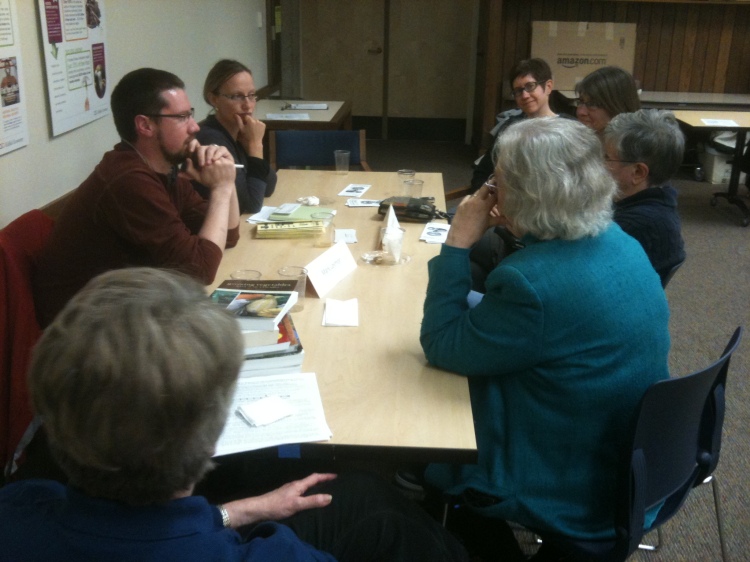 Students quickly took the initiative. A rally at the Illinois State campus on October 5th garnered over 200 students, a General Assembly was held October 9th on the Normal roundabout, and Occupy BloNo’s permanent encampment on the ISU campus – the second longest in the country – began on October 13th.

Occupy BloNo organized a number of actions and marches, and also participated in those of the community. Many people in Occupy BloNo supported a 36 percent cap on interest rates, protested the power of the big banks, and demonstrated for peace.
Occupy BloNo at ISU
Occupy BloNo on the March
Occupying Wesleyan
Solidarity with Scott Olsen and the Oakland General Strike
Occupy Protests War Criminal Condi Rice
Occupy BloNo Day of Action 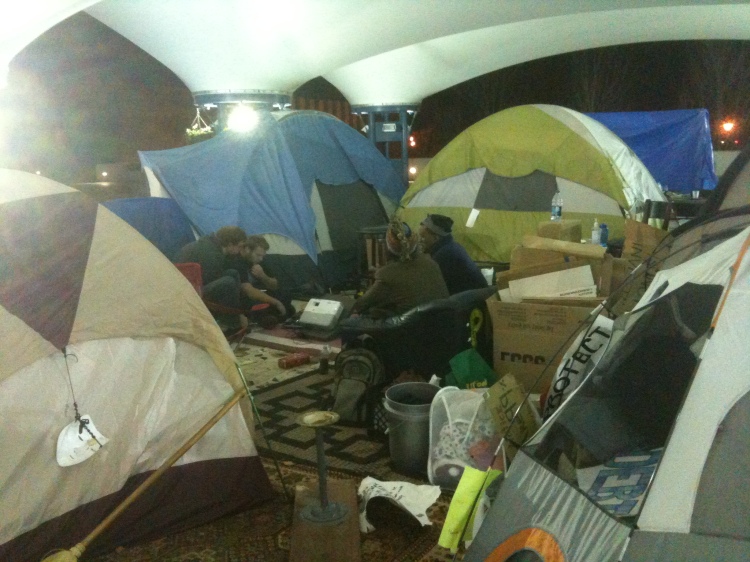 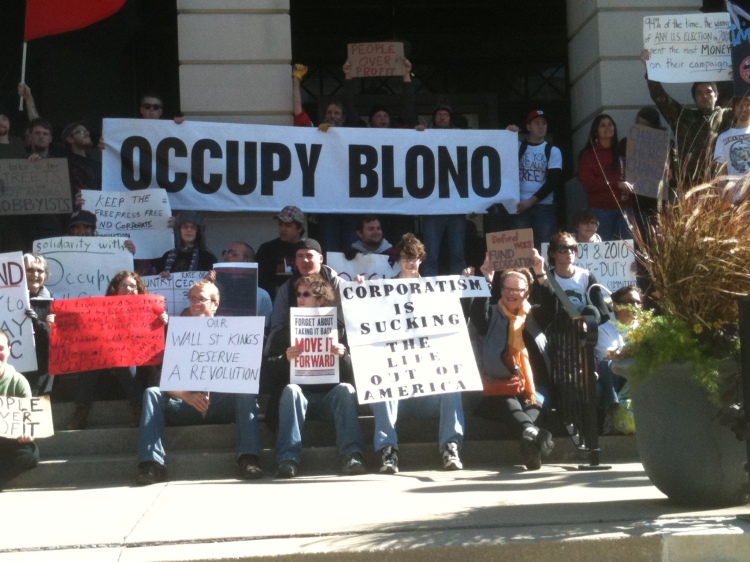 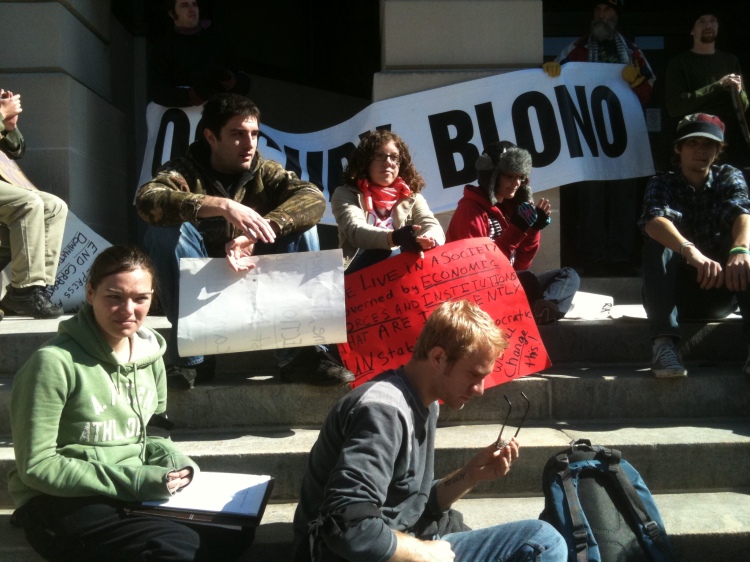 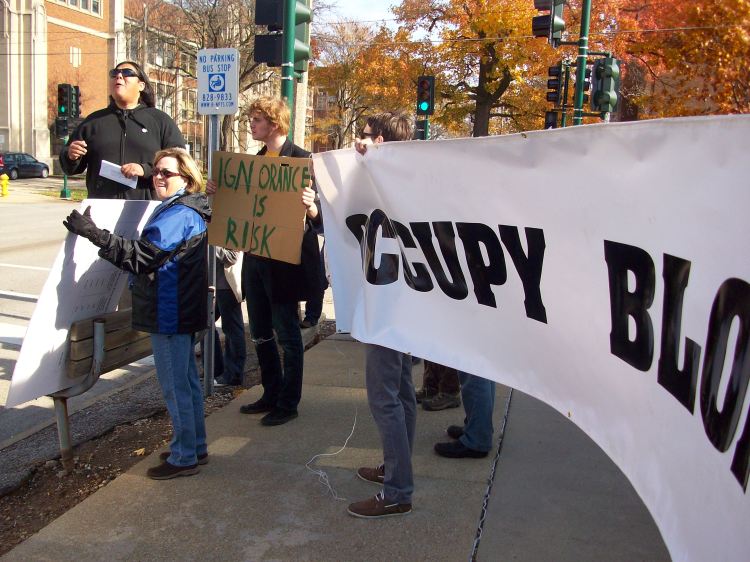