Civil Disobedience as a Tool Against Home Foreclosures

The economic downturn of 2008 unleashed an epidemic of home foreclosures that left no community in America uninfected.  On February 19, the Common Action Free School hosted “Taking Back the Land”, the first in a series of talks demonstrating civil disobedience as a potential cure.  The program’s first installment, hosted by Jenn Carrillo of Illinois State University, attempts to disseminate “civil disobedience” by placing it in a context separate from the usual run-of-the-mill demonstrations and direct actions that, while earnest, have ultimately failed to resolve our nation’s mortgage crisis.

While attending a leadership conference in Nashville, Jenn Carrillo received training from Reverend James Lawson, who advised Dr. Martin Luther King JR on utilizing civil disobedience as a method to fight unjust laws that held minorities captive as second-class citizens.   The training sessions sought to transform these same techniques into the “Taking Back the Land” program.  This involves refusal on the part of homeowners to recognize evictions and become “squatters” within their homes.  Its success requires the active presence of community members to stand in solidarity with homeowners against police and bank representatives seeking to unjustly evict families.

If you are interested in learning more about civil disobedience and its potential to help families dealing with foreclosure, please contact Jenn Carrillo at jenn.carrillo90@hotmail.com or the Common Action Free School at http://www.commonactionfreeschool.org/contact.html.  Jenn is happy to set up training sessions with any community members or groups who wish to get involved. 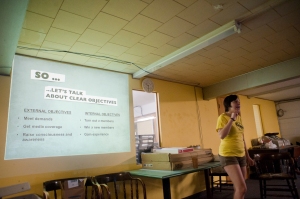 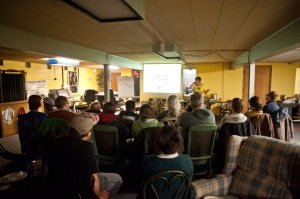 i'm a force to be reckoned with.
View all posts by elmonstrue »
« IWU Student Forum on Iran Brings Together Peace Community
Normal Screens ‘With My Own Two Wheels’ »

2 thoughts on “Civil Disobedience as a Tool Against Home Foreclosures”