Approximately 30 people, members of Illinois People’s Action (IPA) and supporters, visited the McLean County Chamber of Commerce on Monday to have their voice heard on the issue of fracking.

Those in attendance, festive with holiday spirit and accompanied by a jolly Santa Claus and his elves, wanted to ask the Chamber to give local environmentalists a chance to explain the economic and environmental problems with fracking. The local and statewide Chamber of Commerce has pushed fracking in recent weeks, a campaign that immediately followed large, local community events opposing the practice.

The Loomis study purports that fracking would bring a significant number of jobs and money to Illinois localities, an assertion not supported by much other research, says local environmentalist Bill Rau. (Read Bill Rau’s full report, Closer to Fantasy than Fact: The Illinois Chamber of Commerce Report on the Economic Impact of Shale Gas in Illinois.)

Interviewed by WGLT during the IPA visit to the Chamber, Bill Rau highlighted a number of problems with the Illinois Chamber of Commerce study. The following synopsis of Bill Rau’s research was provided by the Illinois People’s Action press release:

Throughout IPA’s afternoon visit, McLean Co. Chamber CEO, Charlie Moore, refused to speak with IPA representatives. Mr. Moore walked through the group of local residents in his lobby and abruptly shut the door in their faces when they attempted to speak with him.

Afterward, IPA members sang anti-fracking carols in the Chamber lobby. Santa left the McLean County Chamber lumps of coal this Christmas season for its refusal to listen to perspectives other than that of the gas industry.

In the interview later posted by WGLT, in an apparent about-face and concession to Illinois People’s Action, Charlie Moore said that he would agree to having IPA’s side of the fracking story be heard by the McLean County Chamber of Commerce.

Video of IPA and Santa’s Visit 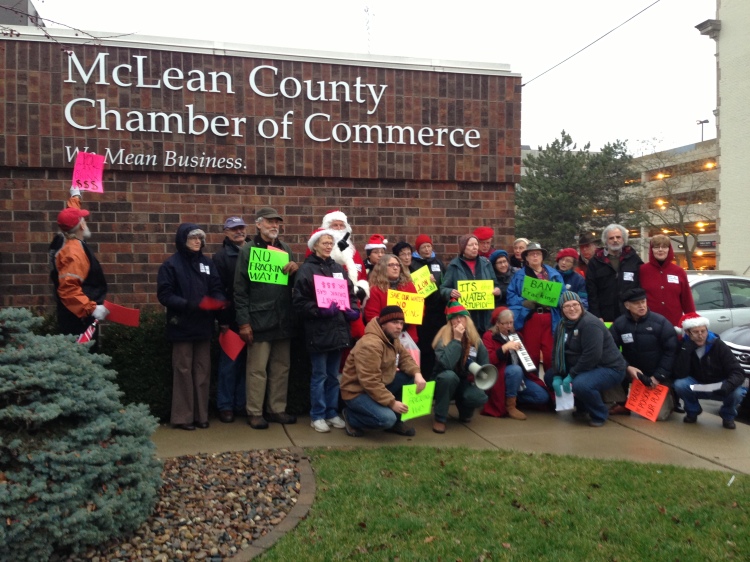 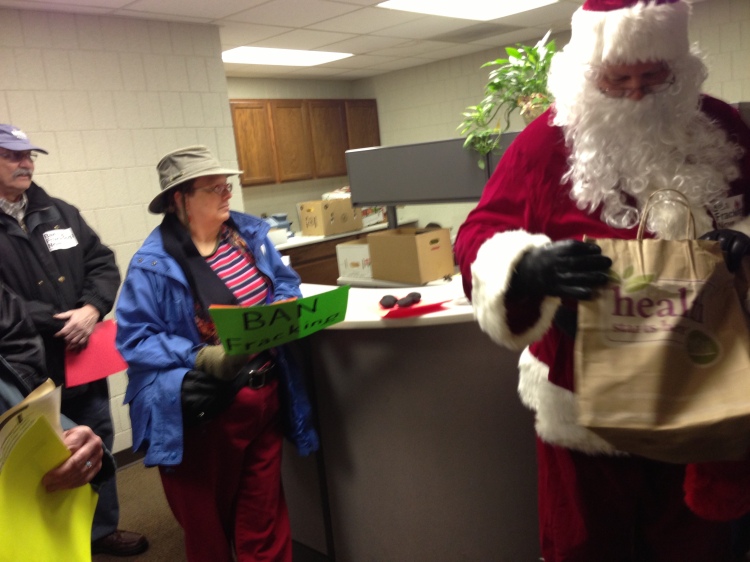 « Closer to Fantasy than Fact: the Illinois Chamber of Commerce Report on the Economic Impact of Shale Gas in Illinois
Just BloNo 2012: Photos and Reflections »