[Grassroots organizations, including Southern Illinoisans Against Fracturing Our Environment (SAFE) and Illinois People’s Action (IPA), are opposed to HB 2615, a pro-fracking bill in Illinois. What follows is a critique of the Illinois Environmental Council’s support of HB 2615.]

In a letter to Illinois residents, the Illinois Environmental Council (IEC) Executive Director, Jennier Walling, defends the role of her organization and its lead affiliates in bringing hydraulic fracturing (fracking) to Illinois.

“Yesterday in Springfield, IEC and many of our lead affiliate organizations, Environmental Law and Policy Center (ELPC), Natural Resources Defense Council (NRDC), the Illinois Chapter of the Sierra Club and Faith in Place signed on to support HB 2615, a bill that establishes the most stringent regulations on high volume horizontal hydraulic fracturing in the country.”

The IEC claim to have established “the most stringent regulations” on fracking is a smokescreen, when fracking is barely regulated anywhere in the country. But what is clear to environmentalists in the movement is that no amount of regulation will make fracking safe. According to anti-fracking activist Bill Rau, what the IEC and lead affiliates actually accomplished in the bill amounts to a gigantic give-away to the gas industry, a negotiated defeat.

Most noticeable in Ms. Walling’s lead sentence is who she includes as having signed on to the fracking bill: only a few lead affiliates of the IEC. This is because the direction of the IEC is determined by its lead affiliates, or as Jenn Walling herself told Illinois People’s Action, only those organizations that pay more money. It can’t be overstressed that the IEC’s internal decision to bring fracking to Illinois was reached by “pay to play” methods familiar to corporations, not by meaningful democratic procedures.

Professional lobbyists are accustomed to negotiating compromises (in most cases, defeats) behind closed doors, with no real leverage. In what follows in Walling’s letter, there’s no mention of having tried to build a grassroots movement to defeat fracking in Illinois:

“For more than two years, environmental groups have been working to pass either a moratorium on hydraulic fracturing or tough regulatory laws. Faith in Place initiated this effort in 2011 when it worked with State Senator Michael Frerichs and Representative Naomi Jakobsson to introduce the first bill to regulate hydraulic fracturing.”

The initiation of their campaign, as Jennifer Walling describes it, is with politicians and not people. This has been standard operating procedure with inside-the-beltway national groups like the Sierra Club for decades. Professional activists in these organizations make their living, not in organizing the movements we need to win on these issues, but in their access to powerful politicians.

Ms. Walling explains the process of how environmentalist groups in the negotiations were hand-picked by Representative John Bradley, and how the IEC itself determined who would represents environmentalists at the table:

“Representative John Bradley invited four people from oil and gas interests and four people from the environmental community to participate in the process. At that point, environmental organizations had to decide whether to reject the process or join the negotiators at the table. The decision was made to participate and attempt to draft the toughest possible regulatory structure. Our interests were represented at the negotiating table by ELPC, Environment Illinois, Faith in Place and NRDC. It is unprecedented for the environmental community to be invited to the negotiating table and given such a strong voice, and we believe it would have been irresponsible for environmentalists to walk away and allow the business community to draft the needed regulations.”

When Walling says “environmental organizations had to decide” whether or not to reject the process, she means the IEC and its lead affiliates. Illinois People’s Action reported, according to its source, that “the only way a group got into the closed door “negotiations” was as a supporter of fracking, maybe not a cheerleader, but not for a ban either. It was important to be a team player. Illinois People’s Action never got in, nor did Southern Illinoisans Against Fracturing Our Environment, the two active grassroots opponents calling for a ban.”

Environmentalists supporting a ban on fracking disagree strongly that the IEC had a strong voice in negotiations, when the result of those negotiations is a green light for corporations to begin fracking in our state. We believe it was irresponsible of the IEC to decide for itself that fracking was inevitable in Illinois and then give its stamp of approval to fracking.

So, in negotiating a defeat on the issue, Jennifer Walling tells us how hard it was to make this decision:

The situation in Illinois is especially perilous, as we know that thousands of acres within the state’s boundaries are being purchased by oil and gas interests and current Illinois laws are entirely inadequate to regulate hydraulic fracturing activities. At the end of the 2012 spring legislative session, we had been unable to pass a moratorium or even minimum regulations. Not only were environmental leaders upset but so too were the Attorney General’s Office and agencies under the Governor, including the Illinois Department of Natural Resources. Concern about the failure of the legislature to act and the expectant start of hydraulic fracturing in Illinois resulted in Speaker Madigan and others in the Illinois House creating a working committee to begin drafting a meaningful regulatory framework.

Any serious appraisal of their bill, HB 2615, would show that it also is entirely inadequate to regulate hydraulic fracturing activities. A grassroots anti-fracking movement in New York is keeping fracking out of their state, while here in Illinois the ‘mis-leaders’ of the environmental organizations are inviting the gas industry to frack the land!

HB 2615 needs to be defeated as an industry bill. As described by local activist Bill Rau, it is a deregulation bill, a gift to the gas companies. If that weren’t bad enough, it also strips away our current right to determine whether or not fracking comes to McLean County. Here in Bloomington-Normal, Illinois People’s Action has worked hard to defend McLean County’s current ‘special permit’ land use procedures, which provide local democratic control and public transparency in land use issues. Just last week, the McLean County board passed a resolution defending those rights. Jen Walling, toward the end of her letter, implies that the loss of these rights is “an example of what is not adequate”:

“While current local regulatory abilities were not weakened in any way by this bill, the environmental community still advocated for greater local control or more local involvement over the siting of fracking operations. We argued to the end for greater local involvement but ultimately the legislators decided that these decisions belong under the authority of the state. We did, however, get extensive language to ensure public access to records, public involvement in the permitting process and citizen rights to take legal action.”

Here, without clearly stating it, Ms. Walling limits her definition of localities to municipalities – cities and towns. Under HB 2615 we would indeed lose our ability, at the county level, to determine through a permitting process if fracking will be practiced in McLean County. Under the new law, as outlined by Bill Rau, “counties can formally object to a permit but the bill doesn’t specify how the objections will be handled.”

While we have been sold out by the large environmental organizations, we will continue building a grassroots movement to oppose fracking in Illinois. Our rights, and the health of the planet, are too important to leave in the hands of careerist politicians and undemocratic NGOs.

Please join Ilinois People’s Action, next Monday, March 4th, in an action in Springfield to protest a pro-fracking seminar, a joint collaboration between the Illinois Chamber of Commerce and the Illinois Environmental Council that will attempt to influence county board members and commissioners across the state. When Illinois People’s Action members followed stated procedure and tried to register online for this seminar, they were denied entry. Only frackers can participate on the inside, but we will be there on the outside.

The Frack Attack is Here!
Fight it! Let’s kill the deregulation bill!
IPA Day of Action
Monday March 4th at 9:15am

What – Action at fracking conference, visit to governor, meeting with Attorney General
Where – 3280 Northfield Drive, Springfield
Why – Because our air and water, our health, our climate, our farmland and our future are NOT for sale!

For transportation or more information,
contact IPA at (309) 827 9627
http://www.illinoispeoplesaction.org 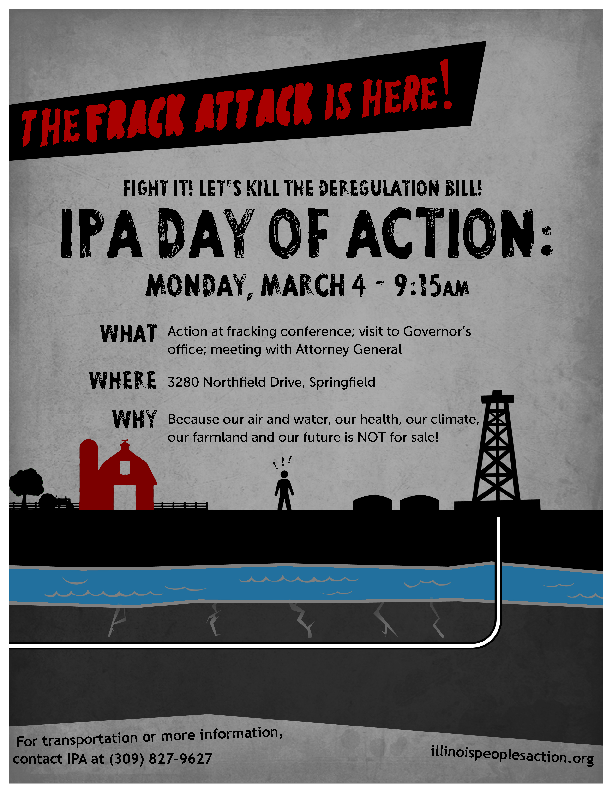