As Illinois legislators and political insiders threaten to green-light fracking for gas and oil in Illinois, a grassroots anti-fracking movement continued to gather momentum in central and southern Illinois.

The environmental coalition – led in downstate Illinois by Illinois People’s Action (IPA) and Southern Illinoisans Against Fracturing Our Environment (SAFE) – got a shot in the arm on May 20th when Josh Fox kicked off his national tour of Gasland Part II in Normal, Illinois.

In attendance – at both the film screening and a prior press conference – were Gasland director Josh Fox, Sandra Steingraber, renowned environmental biologist and central Illinois native, and Carolyn Raffensperger, executive director of the Science and Environmental Health Network. Below are portions of their speeches, given during the IPA press conference, which together provide the movement’s reasons to oppose the proposed legislation that claims without basis to make fracking safe.

That evening, the national public premiere of Gaslands Part II took place at the Normal Theater, which was soon filled to its 400-person capacity.

[For an excellent synopsis of the film, which focuses on issues of political power in the fight against fracking, see Steve Horn’s piece at the DeSmogBlog.]

A line forms early outside the Normal Theater to see the premiere of Gasland Part II. 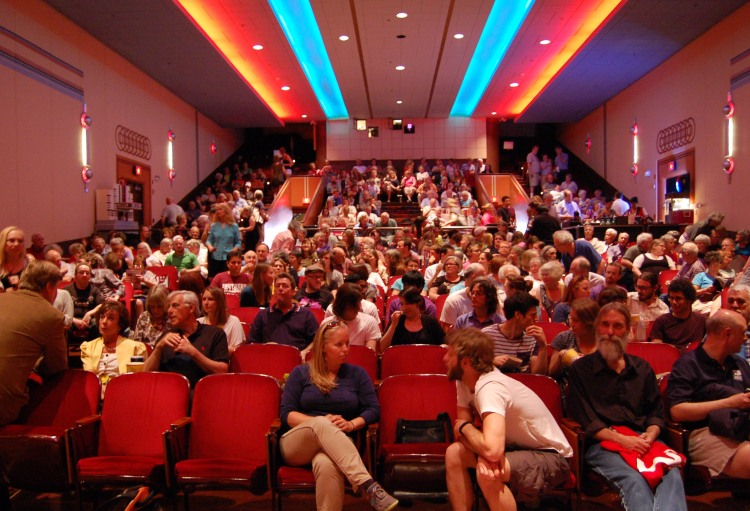 People from throughout the Midwest filled the Normal Theater to see Gasland Part II and discuss its significance for Illinois with Josh Fox, Sandra Steingraber and movement leaders.

Immediately following the film showing, director Josh Fox and Illinois People’s Action led a discussion of the gas industry push to bring fracking to Illinois and how citizens can fight back.

The post-film discussion included a lively back-and-forth between the audience and key leaders of the national anti-fracking movement. Below are some snippets of the discussion.

Citizens Speak Out Against Fracking: Illinois and Arkansas

Josh Fox and Annette McMichael mingle outside with the crowd amassing to see the film.

During the discussion, attendees were asked to attend a House committee hearing in Springfield the following day, on May 21st, and oppose the committee’s approval of fracking legislation for consideration in the House and Senate. Josh Fox also encouraged everyone present to sign up with Illinois People’s Action to keep in touch as the fight against fracking continues in Illinois, whether or not the fracking legislation passes in the next two weeks.

The following day, over 80 people from Bloomington-Normal protested against the passage of fracking at the Illinois capitol building. Protesters filled the hearing room, and both Sandra Steingraber and Josh Fox testified against the bill supported by the gas industry, big environmental organizations and the AFL-CIO (See video of her testimony and those supporting fracking in Illinois). Unfortunately, the bill passed through committee and could come up for a vote in the next week.

[For the latest news in Sprinfield, including the vote today allowing fracking out of committee, read the coverage by the Chicago Tribune. Legislators voted the measure out of committee amid widespread citizen protest in the hearing.]

For regular updates on the fight against fracking, visit the Illinois People’s Action website and Southern Illinoisans Against Fracturing Our Environment. People can also like the IPA page on Facebook for information.

Photos from Springfield, May 21st

Illinois residents opposing fracking fill up the committee hearing of legislation that would green-light fracking in Illinois. Courtesy of Illinois People’s Action. 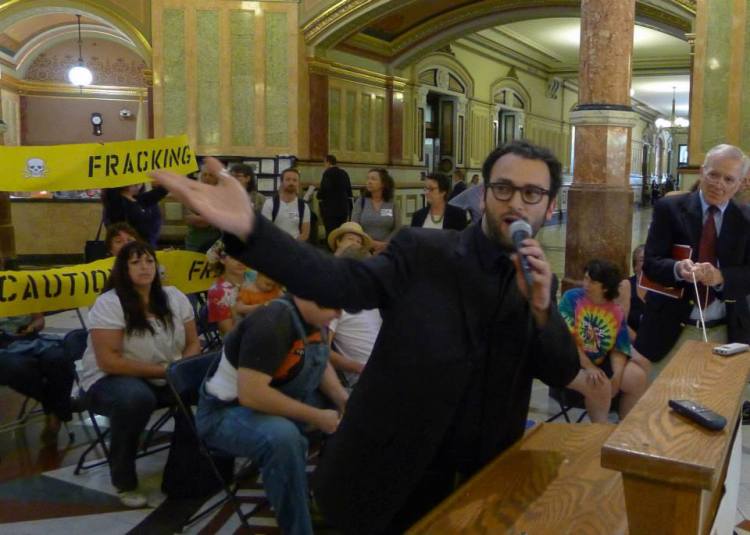